In February, it will be almost exactly five years ago that I have published ‘Wodel’, a Windows version of the Jodel app, which had its biggest natural hype at that time. Of course, being a student at the time I wanted to be a part of it, but since I was using the Lumia 950, a Windows 10 Mobile device, it wasn’t that easy. So I have created a first basic version in a few days, which was not only extended with more features over time, but also got an ‘unofficial’ official blessing from the operators of Jodel, as it was tolerated as an unofficial app, I got support in accessing the servers, did not had use reverse engineering anymore and the app even was mentioned in the official Jodel FAQ:

In all that time, the app achieved around 41,000 acquisitions (i.e. unique users who downloaded the app) and that number is still growing per around 100 new users every month for the last while, which of course means the app is no longer in its heyday. But as everyone knows, the world around has changed: Windows 10 Mobile has been completely discontinued; the Windows Store (or Microsoft Store in the meantime), which is also available on the PC, is still one of the worst apps I know (it has become better, but worse was just not really possible); I have finished my studies and I do not use a Windows 10 Mobile device as a daily driver anymore since 2017 – a reason that Windows 10 apps have lost a lot of priority for me, so that Wodel has not received any significant new features since 2017.
In particular, the Channels, without which the main feed is pretty much dead by now, never made it and a completed implementation of the Travel Mode, which I had planned to release is no longer part of the original app at all. I think what I am most ‘proud’ of is that with the dark feed I was apparently able to inspire the developers of the official app to come up with a similar handy feature, even if it still is declared as BETA in the Android version years later, while in Wodel it darkens the entire interface: 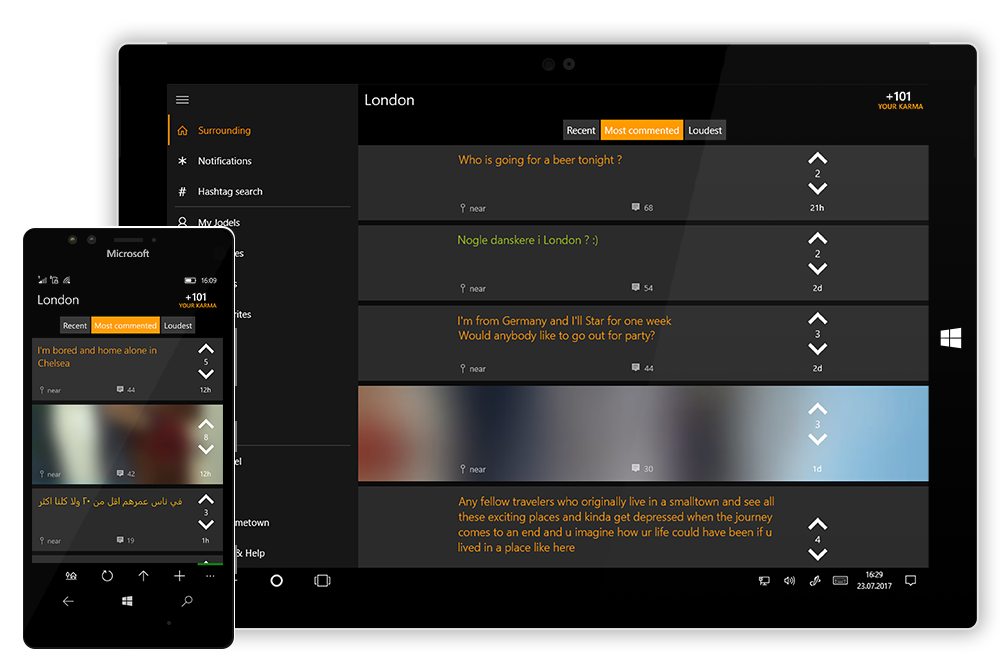 I had been thinking about how to proceed with the app more than once over the last few years: Making the code open source was the most tempting idea for me, but since I was not allowed to publish the API, I would have had to develop a wrapper for it so the app would load at least some demo data and the community could work on the app’s user interface. Discontinuing the app was also on the table more than once, but maybe I am not a fan of such final decisions – even though looking ahead to 2021, I felt more ready for it than ever before, as I want to put my focus much more on Android and iOS. This decision has now been somewhat pre-empted by the Jodel operators, so these days will be the last of Wodel.

.
According to my current knowledge, it is still possible to use the app if you have a valid account, but new accounts can no longer be created and under some circumstances even the valid accounts no longer work or stop working more or less suddenly. Unfortunately I have no influence on this and I cannot give any support here, because this is not related to the Wodel app, but to the Jodel servers.

However you have the possibility to transfer your Jodel account to the official app for Android and iOS if you do not want to lose your karma. To do so, you have to send me an email in Wodel via Settings > Report a problem, whereupon you will get an ID from me. Install the Android/iOS version, set it up and contact the Jodel support there with the account transfer request, inserting the ID I sent you. Usually the transfer happens within 1-2 days.

.
With Wodel I would like to thank the back in those times still large Windows Phone/Windows 10 Mobile community for all the support I have gotten over time. I mean, I have never done any kind of advertising for the app, I know that with Dr. Windows and WindowsUnited.de two of the larger German community sites reported on the app at that time, and find over 41,000 users all in all for the niche Windows 10 Mobile platform (there was never more than a prototype for Windows Phone 8.1) a pretty solid number.

I can reassure the remaining community at this point that the end of Wodel does not mean my complete end on the Windows platform. Kleine Anzeigen just recently got a small update and also PitlaneOne will of course get a season update for 2021 this year – though there will be a lot more to come with the app… 😉