In April 2012, exactly nine years ago, I started – back then under the name “F1uptodate” – the unofficial Formula 1 app called PitlaneOne. At that time, the app was developed in J2ME, the unbelievably great Java Mobile framework that was still running on the Nokia phones I used at the time. The app was very rudimentary and was quickly replaced by a Symbian C++/Qt version. Over the time, I changed the operating system a few times and the app was redeveloped for each: Either there was no official app for this platform. Or it was just bad. So a Windows 8, a Windows Phone 8.1 and a Windows 10 version were created. Back in 2017, when I threw my Lumia 950 aside a little more aggressively in the car after it got stuck during navigation, it was time for me to switch to Android. And almost four years later, PitlaneOne is now also available for this platform. 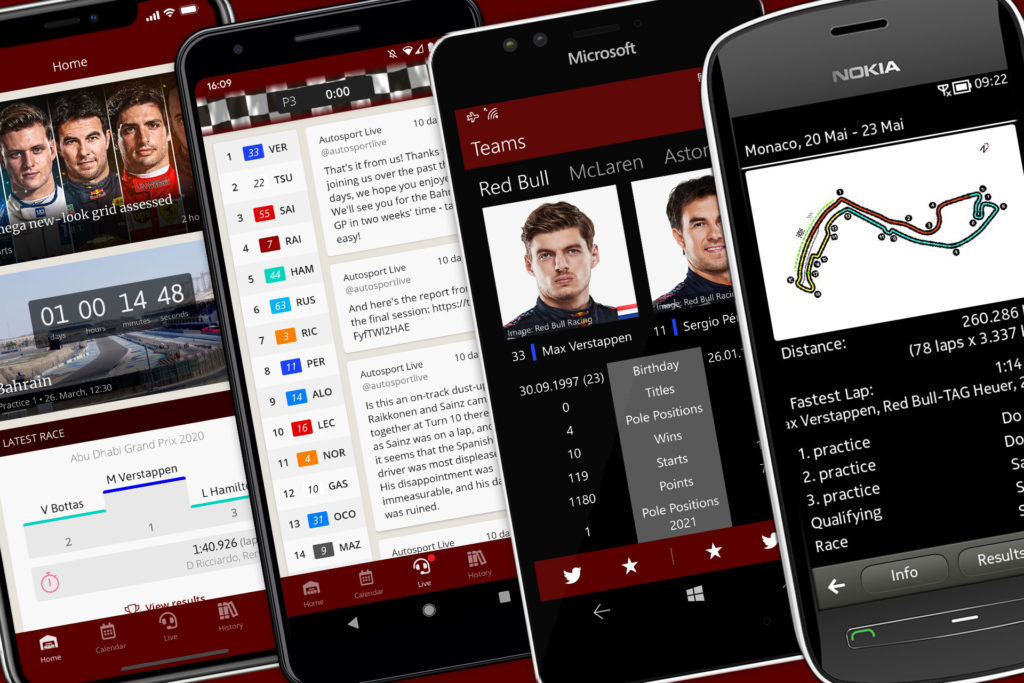 On Android and soon on iOS

You keep self improving over time and I think you can see that in the development of my apps over the years and the Android/iOS version is no exception. Of course, I didn’t wrote two separate applications, but used the React Native framework, with which a very good result can be achieved on both platforms. The small highlight of the app is the complete database of all Formula 1 results since Silverstone 1950, which was created as part of the first Corona lockdown. Access to all seasons, all results, all drivers, all teams, designers and engine manufacturers is therefore possible in the app – even offline.

In addition, the app packs everything known in a slightly prettier design, which has also changed from dreary gray to a noble dark red: You are greeted on the home page with your favorite news sources, a countdown to the start of the next session and an overview of the last race, the World Championship stands and all drivers and teams of the season. In the Calendar you have access to all sessions and results, whereby the sessions are also available in the local time of the destination and in UTC – both for the first time in PitlaneOne. As also in Windows 10, the sessions can also be exported automatically to your device calendar and this time you can fine-tune a possible reminder. In the race results, the fastest lap is displayed as well as a “Notes” overview for each session, in which you are informed about penalties, but also irregularities. The race results now support the change of a driver to another team during the season. The Windows 10 version was not yet able to do that, so for example, George Russell had the Williams colors in Sakhir 2020, even though he drove for Mercedes. In addition, I can update the calendar “on the fly” for the first time: If the start time for a practice or qualifying changes, or if race events have to be added or removed due to the current situation, no update is necessary via the store. 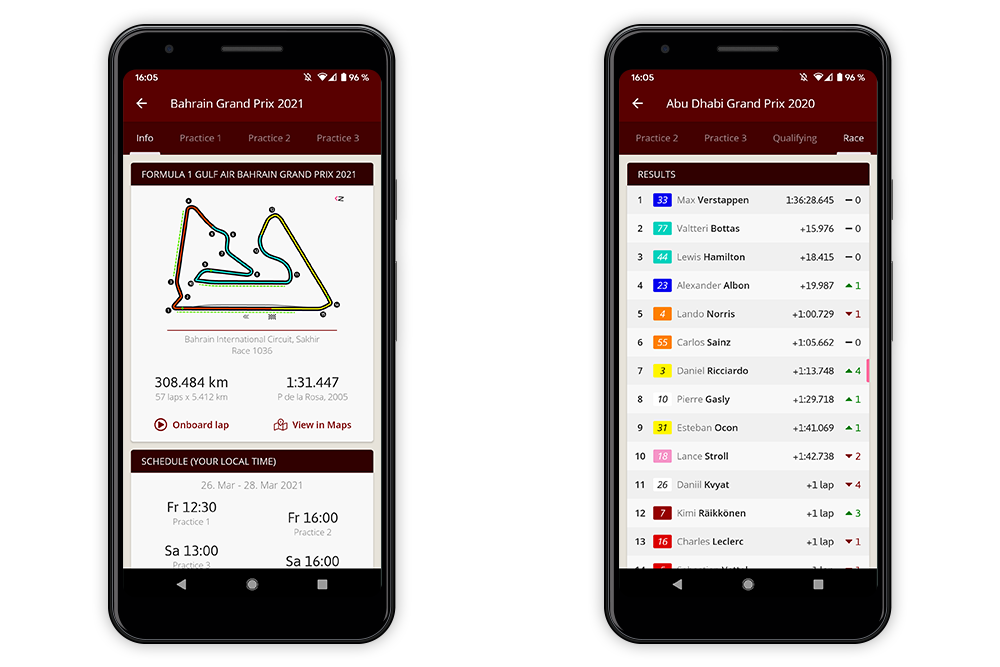 I had already mentioned the database supplied with PitlaneOne above. In the Android/iOS version you have access to all Formula 1 results since 1950. In just a few steps you can see who won where or when, who scored the fastest lap and who won the World Championship. You have access to all 71 seasons since 1950 with more than 1.000 races, to all racetracks and their layouts – in kilometers and, for the more recent ones, also with hand-designed layout graphics, so that you have an overview of the respective track. In addition, you can sort drivers, teams, constructors and engines according to the number of wins, podium placements and much more and have extensive statistics displayed for each participant, which is planned to be expanded over time.

The unofficial live scoring is also back this year. I was able to find a new hopefully more reliable source so that you can follow a session even if you do not have a TV or laptop at hand. Please note, however, that this is not the official live data (as I am not allowed to use it) and that it will therefore not be completely synchronized in terms of reliability and timeliness. But it’s always better than nothing. 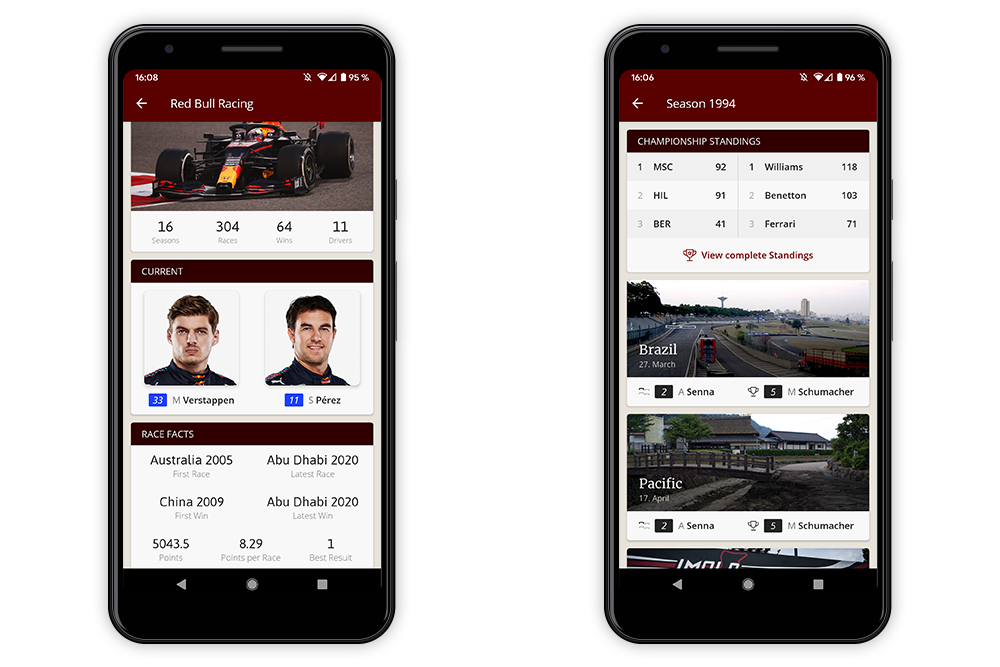 Learn everything about all Formula 1 drivers and teams, no matter if the current ones or in the past with a huge database

PitlaneOne is now available for Android on Google Play. Like the previous versions, the whole app is a hobby project for me, so the app is free, ad-free and can be obtained without any tracker or analysis tools. If you like the app, I would of course be happy to receive some support, be it via the pizza icon in the app, recommending the app to your friends or your hamster and of course also a review in the Play Store. In addition, the app is currently only available in English and German (Polish coming soon), but I would like to add more languages ​​here as well. So if you know another language and would like to invest a few hours in translating the app, I would be extremely grateful – just send me a mail.

Oh and yes, the iOS version is actually finished, but Apple is not yet completely happy with it, but they do not want to tell me exactly why. Let us hope that the version (which is identical in terms of functionality) for iPhone and iPad will be ready for the next race in Portugal.

The Windows 10 version had already received its update right in front of the Bahrain Grand Prix. To unify it, the gray was swapped for the new dark red app color and the app was connected to the new database and adapted so that it will be much easier for me to maintain it in the following years. The Windows 10 version does not yet support updating the calendar “on the fly”, but I will definitely try to add that over the next few weeks as it will save me a lot of work. The Windows 10 version is available for free in theMicrosoft Store. 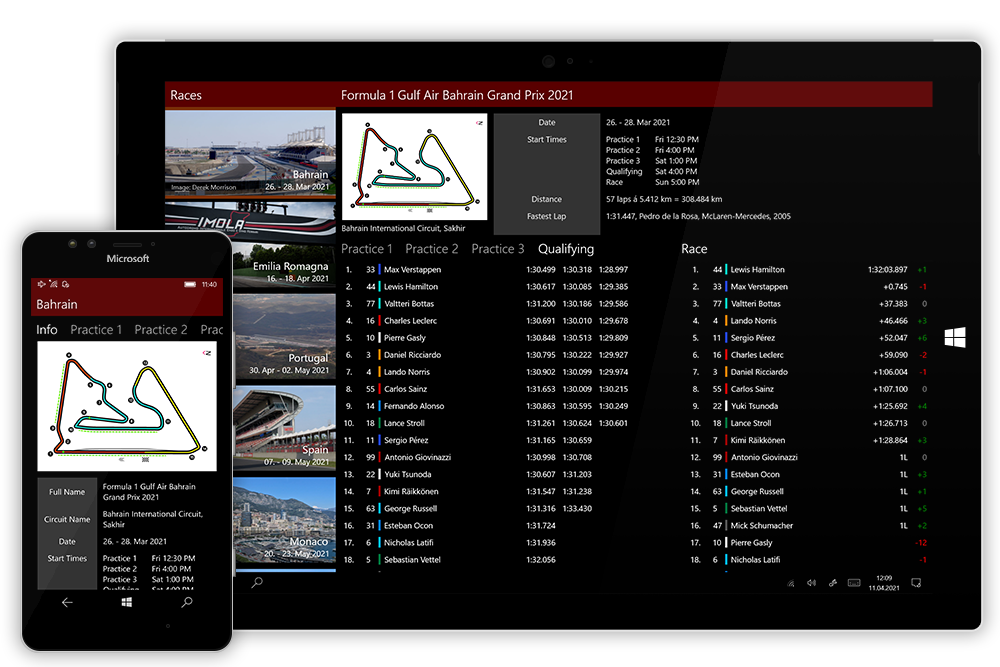 The Windows Phone 8.1 version was forcibly discontinued last year because Microsoft had prevented the upload of updates in the store for Windows Phone 8.1 apps and there was no possibility of sideloading, i.e. installing apps from sources other than the store. In the meantime, the latter has apparently changed so that sideloading is now possible, which I myself will not try here due to lack of interest. If you are still using a Windows Phone 8.1 device and would like to continue using PitlaneOne and have had success with the methodology known in the linked video, sned me a mail and offer yourself as a guinea pig 😀 I would then adapt the app to Windows Phone 8.1 and send you a version for testing. If we are successful, the version would be available for download here.

Yes, the good old Symbian is still among the supported platforms for PitlaneOne. My Nokia 808 PureView has just got a new battery because the old one had given up and I was allowed to experiment a lot to circumvent the platform’s lack of TLS1.1/1.2/1.3 support, without abandoning the secure https connections completely. Nevertheless, there is an update with the current drivers, teams and calendar data as well as, same as with Windows 10, the “connection” to the new database, so that maintenance will be much easier for me in the future. 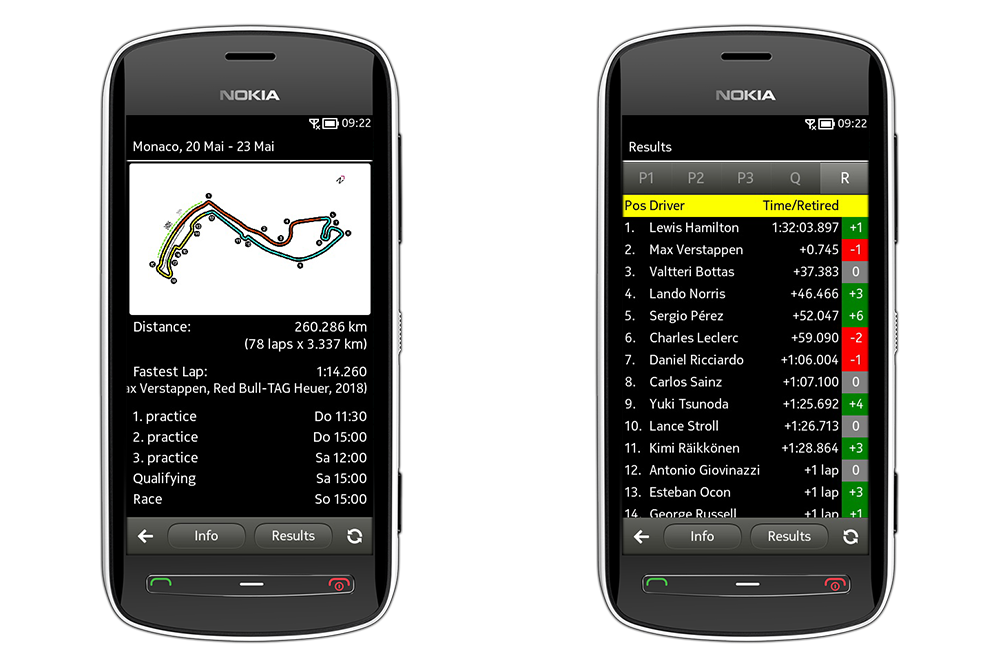 The Symbian version has also received the dark red app icon, and the position shifts in the race results are back – I have absolutely no idea why I took them out at some point. As always, the Symbian version is available for free download via AppList.

And as always more info with screenshots and Store links can be found here.

As soon as the iOS version is out, PitlaneOne will finally support the two major mobile platforms. A few improvements are planned for the next undefined time, including the layout to be further adapted to the tablet form factor and the database to be expanded. For the beginning, however, I think that the app now offers a very extensive basis and, apart from the translations, I can take a few weeks away from the actual code 😀 After the database itself required almost five months of work and the app also had to be developed and designed as well – I honestly admit that I can no longer see the code of the app at the moment…