In less than two weeks it will be loud again on the Formula 1 race track in Bahrain, because that is where the 73rd season of the Formula 1 World Championship starts. After the heart-beating final in Abu Dhabi last year, the cards have been reshuffled due to new technical rules, so hopefully there will be more than just a duel between Hamilton and Verstappen for the championship this year. PitlaneOne is of course there for you, as the app has now received an update for the start of the season and will accompany you and me for the 11th time in the racing circus.

Due to my very limited free time over the last few months, this update consists primarily of updating the static data for the new 2022 season. The most notable new feature this year is the list of all Formula 1 World Champions since 1950 in the History tab, so you can memorize that list just like Sebastian Vettel with the app. 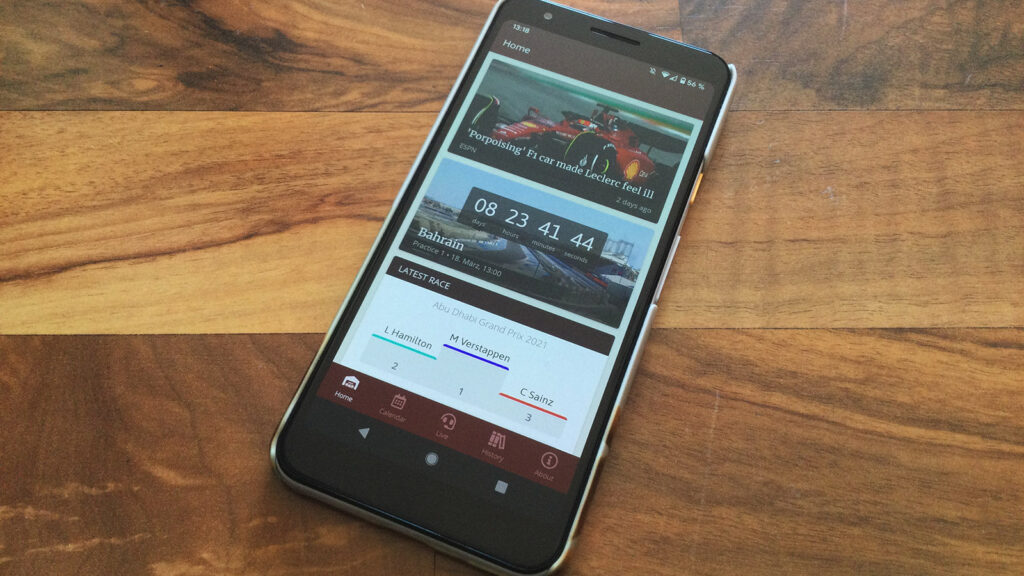 Otherwise, I created the technical basis to be able to update the static driver, team and track pictures without having to publish an update for the entire app. So it is now possible for me to adjust the static data “on-the-fly” independently of app updates.

Of course, the Windows 10 version has also received a data update and is ready for the new 2022 season as well. With that version I can now exchange pictures with “on-the-fly” updates, too, although in contrast to the Android/iOS version these images will not be saved offline. Anyway there are no other innovations in the Windows 10 version.

This year’s problem is the Symbian version. Not because of the code itself, but because both my Nokia 701 and my Nokia 808 PureView seem to have quit their service. Both flash when you charge them, but cannot be started. And unfortunately I cannot publish a new version without a test device, so I will have to see if I can find some time at the beginning of April to get a “new” test device or if I can somehow track down the issue in both devices. In view of the limited online resources for the devices themselves, I imagine this might be very difficult.

PitlaneOne is thus ready for 2022 on the platforms Android, iOS and Windows 10. As always, the app is free of charge and can be downloaded from the respective App Store, you can find all links on this page. If you would like to support further development, I would be the happiest if you tell your Formula 1-loving families, your friends and your dachshund about the app. In addition, I would like to thank Dalibor, Miguel, Jaakko, Luca, Enza, Luc and Ivan for their translations and I would be happy to receive an email if your language is still missing and you would like to add it. If you would like to support me financially, you can of course do so either directly via the app (look for the pizza symbol) or via the website.