Edit 2019: I plan to write a few blog entries about started but never finished or not released apps and projects in the last few years. The Formula E-app is actually one of these, so it fits perfectly into the category…

After the race in Moscow (6. June) just two races are left to finish the first and current season of the Formula E series, namely the Visa London ePrix 2015.
That is the end and at the same time a beginning as the next season is promised to have more races, further developed technology and other improvements… 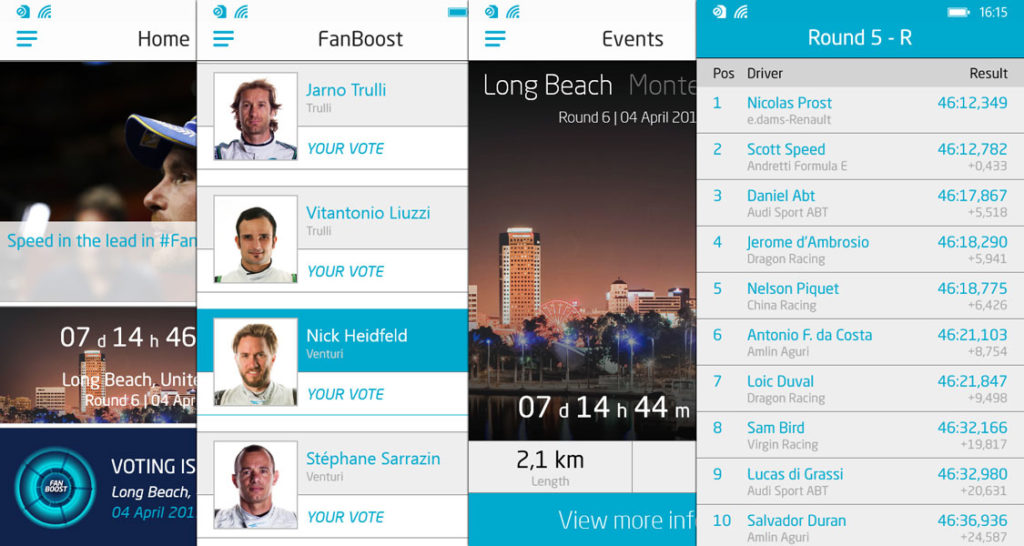 What is great to see is that the Formula E tries to attract younger people as well, with affordable tickets and a rich social media presence (like the #Fanboost voting). Additionally, as you might expect, there is an official and (completely free) app for iOS and Android – as you might expect, too, there is no Windows Phone version available, what is really sad, as the iOS/Android apps have been developed with the cross platform framework Qt (you might know from Symbian), with that you could also release a Windows Phone version if you wanted to do so.

As you might know (if you know me) I am not a fan of cross platform apps with one code because you cannot implement the specific UI each OS requires. So I developed a native Windows Phone app based on the official app. It is not 100% ready but you can see where it goes in the following demo video:

So that’s where you matter! Especially if you are either a Windows Phone fan/user or a Formula E fan! Or even both! The goal is to show them that there are people interested in a Windows Phone version of the app. How? Maybe with a mail to the organizers, you can reach them at media (at) fiaformulae.com, an example mail could be:

Within the last years the Windows Phone platform has become the third-most important mobile operating system with a nearly 10% marketshare in Europe. As the Formula E Championship tries to do it differently than other series by reaching younger fans through social media (e.g. the #Fanboost voting) it is very sad to see that you are not providing any app for devices with Windows Phone, especially with the upcoming Windows 10 release in mind.

Though you could port your Qt app released for iOS/Android to Windows Phone, there has been a native app created fitting into the specific UI and I am wondering why you have no interest to bring your series to Windows Phone devices?

You might know about it you can find more infos about the Windows Phone version, including a demo video, here: https://devattendant.de/blog/tech/eine-formel-e-app-fuer-windows-phone/

It would be great to hear back from you and finally bring the fascinating Formula E series to all major mobile platforms in the future.