PitlaneOne is the only available Formula 1 app for Symbian smartphones and one of the Formula 1 apps for Windows Phone devices. The app contains all relevant data, stats, results and standings packed into a compact interface and is now also ready for the season 2016, which started with the Australian GP on the 18th March.

The Symbian update bringing the app to version 2.4.479 includes updated driver, team and calendar data as well as the implementation of the new backend I have developed for the new Windows 10 UWP app (see below). That guarantees a support for the upcoming years because the Symbian version uses the same data and endpoints as the Windows version. I also plan some small UI improvements although I currently guess that the complete re-development which I am planning now for two years will never happen.
PitlaneOne for Symbian is available for free at AppList.

The MeeGo version already missed the 2015 season, which mainly happened just because I forgot it. Are there any users still alive and would be interested to see an update? ^^

Because I switched with basically all Windows development things to Windows 10 Universal apps the plan was to abandon the Windows Phone 8.1 app and only focus on Windows 10. But as I did not managed it to finish the UWP app (and Microsoft did not properly managed the Windows 10 Mobile update) I went for plan B updating the Windows Phone 8.1 with new data and new backend (the driver/team stats now also contain Pole Positions if you want to have a new feature). So the app is now even ready for a 2017 update, although it will not get any new features or functionality. I will decide based on the market situation if there will be a 2017 update, but there is still a lot of time left.
PitlaneOne for Windows Phone is available for free from the Windows Store.

I have never been a huge fan of the Windows 8.1 version of PitlaneOne, therefore it has been discontinued with the end of season 2015 and is now removed from the Windows Store. I can only recommend the upgrade to Windows 10, if technically possible, and waiting for the Windows 10 app (sorry, you RT enthusiasts).

PitlaneOne for Windows 10 will be a Universal Windows app with PC, tablet, mobile and Continuum support, which has been developed from scratch (this was one of the reasons for not getting it ready in time). Beside all functionality that is already available in the Windows Phone 8.1 app, there will be a lot more features added, where I do not want to spoiler to much right now 😉 I do not want to say to much as well regarding the release date, but I hope to get it ready before the Europe races.
The Windows 10 version will be available for free as well, any kind of support (including feedback) is always welcome 🙂 If you want to have a first look already at what to expect, use the #PitlaneOneW10 hashtag on Twitter… 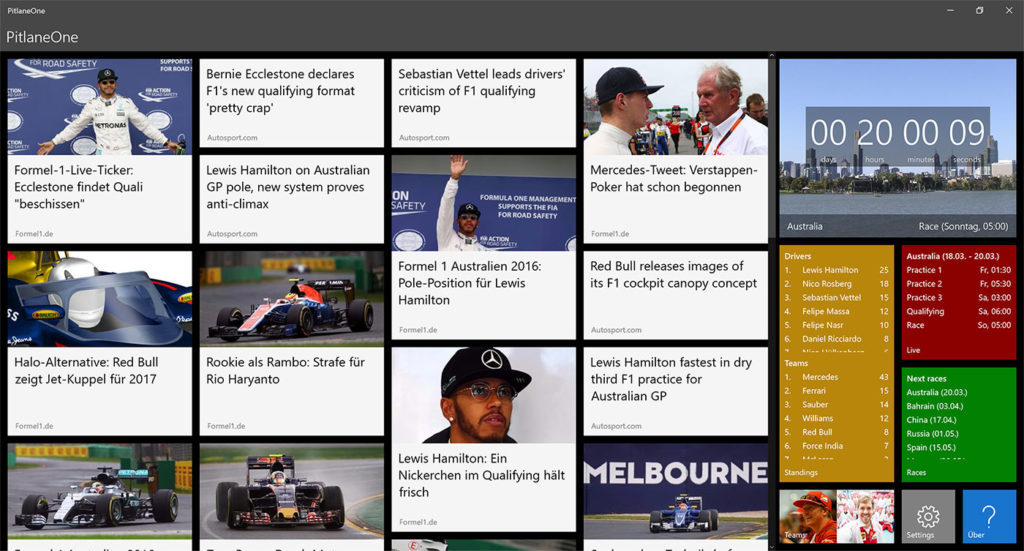