It took me a little bit longer than expected, but finally it’s done: PitlaneOne for Windows 10 is ready. The State-of-the-Art Formula 1 app outside of the iOS-/Android universe is now back for Windows 10 computers and tablets and in a new version for everyone, who installed Windows 10 Mobile already on his or her phone, and all that right before the most exciting race of the year, the Monaco Grand Prix. One app for all devices is possible because of the Universal App idea by Microsoft, which is automatically resizing everything depending on your screen or window size. That means that your screen is never overloaded, but always used as much as possible. But there is no hamburger menu and you can use the app with one hand on your phone without any problems.

Well, because the app has been redeveloped from scratch, the easiest answer to this question would be like Apple: Everything 😉 To be more precise I can list some changes:

The changes for Mobile users are not that huge, anyone who used the Windows Phone 8.1 version will notice, that the UI has not changed a lot. But for PC and tablet users the new version means a huge step forward when comparing it to the not continued Windows 8.1 version. Additionally both versions (PC and Mobile) are developed and improved at the same time and will get new features at the same time as well. The Windows Phone 8.1 version won’t get any new features I guess, but it won’t be removed from the Store and I do not see a reason, why a 2017 update should be impossible.

Right now the new version is only translated in English, German and Polish, but the other languages are going to be added with upcoming updates. And even if the app has been tested by a great team in the last weeks (million Thanks for that 🙂 ), it may have some minor bugs here and there – if you find any please write me a mail/message, then we can fix that 🙂

The app is available in the Windows Store: https://www.microsoft.com/en-us/store/apps/pitlaneone/9nblggh16jjw

If you have a blog or news page and want to write about PitlaneOne, you can find some hi-res screenshots and logos here 😉 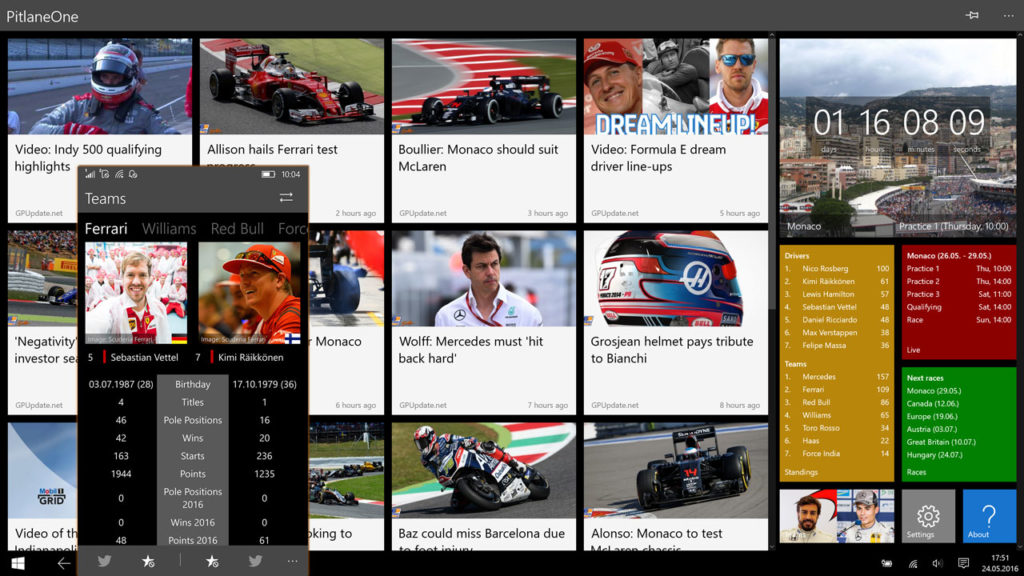